Crating stressed dogs away from home – set up for success!

If you’re having trouble with your dog’s behavior while he’s in a crate, you’re not alone. Most people will have a crate issue at one time or another, whether it’s the way their dog behaves in one, or whether they’ll go in at all.

For reactive dogs, being in a crate means you can’t get away from the thing you have a problem with, and all animals who are trapped give off more dramatic responses than they do when they’re not trapped. Teaching a dog to feel calm in a crate and be ok with the outside world is something we all have to pay attention to, but owners of reactive dogs have to be proactive about setting their dogs up to succeed!

Let’s break it down into some key elements.

Your crate and its location

If you have to crate your dog in a location away from home (like at a seminar or dog training class), by far the best way to set your dog up for success is to choose a location for your crate that promotes comfort. It’s always better for a dog to have room around him with no one able to come straight up to him. That’s even more important for a dog that is already worried about such things! Dogs will be much more defensive when they can’t move away from their trigger, and you need to take that strongly into account and balance things out for him by keeping triggers away as much as possible.

When picking a crating location, you want to make sure you’re out of the way, and not near a lane of traffic. If you can have natural barriers around you, so much the better (walls of the faciilty, say). When you pick this location, however, note what it will be like to walk to and from your crate, and whether there’s a gauntlet you have to navigate when you take your dog out. It’s not great to secure a corner location only to have to pass 30 dogs on your way to and from it!

Another way to get some distance is to have your crate inside an expen, creating a buffer. You can cover that expen entirely with sheets that block all the visuals, and give your dog some measure of safety against anyone coming up too close. Yes, that means taking up quite a bit of space for some of you in places where space may need to be shared. That will have to be taken into account.

Think about the behavior of your neighbors, as well. Are you near dogs who will bark as people and dogs pass by? What does your dog think about that? He likely is aroused by that, and even worried, and it may spark him to behave similarly. If there’s a problem with a dog next to you it’s usually better to just move rather than try to counteract the behavior yourself. I know it won’t always be possible, but if it is, you should be thinking about how to accomplish it. Do you have to be in the building? Do you have to park your car close by? Getting distance, even if inconvenient, sets your dog up to succeed, and that’s really the only way to get the best behavior from your dog. It may mean that you have to pick more carefully which shows you can go to and which classes or seminars you join. 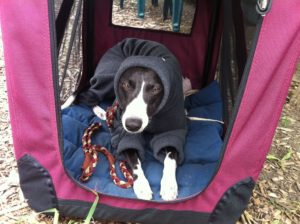 A cover would have kept me warm, too, and had been far less embarrassing than this onesie.

At the very least, cover your crate whenever possible. Unless you have strong evidence that it makes your dog more worried to not be able to see, you should assume that it will help him disconnect and feel safer than he’ll feel monitoring everyone and dealing with those who pass. What you want is for him to sleep, and that’s much harder to do if you are being approached all the time, or think you might be. Breaking that visual is a kindness for most dogs, even if it doesn’t result in immediate behavioral improvement.

Another thing you can do is to crate near known friends that your dog is very comfortable with and that are quiet and calm. It won’t be magically influential (I wish confidence and calm was as contagious as fear and reactivity!), but it provides a buffer and some security for your dog.

Do you know if he has a distance at which he feels better about his triggers? If you don’t, you need to know that. If he can lay down and relax when dogs are 50 feet away but not when they’re 10 feet away, that means you have the information you need to help your dog have a positive experience. 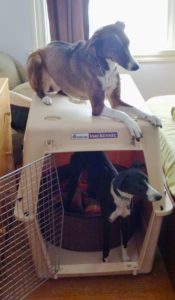 A completely incorrect way to use a crate. Do not attempt.

There are things you can do to help your dog have a better time in his crate. One is teaching
him that crates are for lying down and going to sleep in. You can’t make them sleep of course, but you can teach body postures that support it! I like to teach all dogs how to lay on their sides as a general trick, and then apply it to the crate training we do. Laying down on your side and watching vigilantly are mutually incompatible, and laying down like that is more relaxing physically than standing, or laying in a sphinx position and watching everything. You’ll train that out of the context at first of course.

The other thing you can and should be doing is rewarding your dog in his crate. There are lots of ways to do this, and two things to consider: timing and delivery system. Let’s talk timing.

Do not worry that you are feeding barking and thus reinforcing it. Reflexive behaviors that come up unbidden as expressions of emotion are not going to worsen when we “reward” them (it’s not technically called a reward here because it doesn’t increase behavior and that’s the definition of the term, but I’ll use it for brevity). If your dog is barking, he’s barking because he’s over threshold, and your food may help bring him back to another behavior, and as long as you’re also feeding when the same trigger happens no matter what he’s doing, including when he’s just quietly watching, he’ll see that it’s the trigger that predicts food, not any of his particular responses to the trigger. Thus, triggers become good things. Or at least less bad.

Now, if you have a dog who barks for another reason, maybe just not wanting to be denied going with you, preferring to train and play instead, I wouldn’t feed the barking. I’d instead wait for quiet and feed then. I’d also train a “be quiet in your crate” behavior well out of context so you aren’t just waiting there, hoping for a break in the barking. It’s better to train proactively than try to improvise!

If you’re crated near friends, or if your dog isn’t afraid of people approaching your crate, you can leave a bag of treats within reach and a sign on your crate encouraging people to feed your dog every time they pass by (as long as he’s quiet, if he’s a recreational barker — just say “if my dog is quiet when you pass, please drop a cookie in!”). Lots of people do this. I want to caution you though to really know your dog and whether the gift of the cookie would be worth having to experience someone stopping at his crate and invade that personal space somewhat. If he really isn’t ok with people being that close, a cookie isn’t going to be enough compensation and the technique will only serve to worsen your dog’s worries. I prefer this technique for young dogs, dogs that aren’t any more than mildly concerned, or dogs that are barking from frustration and desire to be out of their crate and not a real fear. Think this through really carefully. It’s always better to err on the side of caution and give your dog a big physical barrier and some buffer space instead.

You can hand deliver food if you have a metal crate or a varikennel type with a metal door, but it does mean you have to be right there. That might be difficult for some if you have a stranger feeding (see above) but even if it’s you it tethers you to your crate for the duration. That’s fine if you have the time to sit there, and indeed do sit there and feed for every passerby to build that classical conditioning relationship. But you do need to help your dog from further away as well, and that’s where a remote feeder comes in. You can strap one to the top of his crate and make sure the treats can fall in, or you can put the machine right inside the crate with your dog and let him eat directly from it.

That means you can stand a ways away and still feed your dog for every passing person and dog. You can also feed as a surprise to keep him happy about being in there, and give him something to focus on. You can reward every time he lays down or chooses to disengage with whatever he’s staring at. Remote feeders are fantastic things and everyone should have one (and a really big crate so they both fit!).

Some of these accommodations means taking up more space than your neighbors are, or asking others to be tolerant of you and even help you out themselves. This isn’t always possible, or welcome, and you may have to think long and hard about whether the location is right for your dog. A dog who stresses in his crate and barks makes it hard for others to keep their own dogs calm and ready to perform, and that’s not fair. It will often be the better choice to crate from your car, or even not go to a show location where you can’t meet your dog’s needs. Be honest and realistic about this.

For more lessons in how to deal with and reduce your dog’s reactivity, both in the crate and out on walks or in the home, come join us in the class “Management for Reactive Dogs,” at the Fenzi Dog Sports Academy, starting June 1st, 2017.  Working spots still available, auditing unlimited.